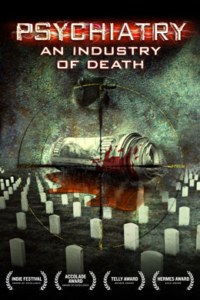 If an ice pick were accidentally shoved behind someone’s eyeballs, or they were jolted by 120 to 240 volts, leaving them convulsing and barely breathing, they would be rushed to a hospital. To a psychiatrist, these acts are “treatment.”

Watch the disturbing truth about the inhuman treatment of human beings were used as guinea pigs to recreate “brain damage.” Also known as “lobotomies,” most patients never survived at the hands of some of these infamous psychiatrists. Over one million people were lobotomized during the 40’s 50’s and 60’s in the United States alone. It is only then that they came to the conclusion that this was a destructive treatment.

Since then you still have Psychiatrists practicing newer forms of psycho-surgery which is passed off as “medical advances.” These procedures are still causing brain damage to innocent victims for the sake of science advancement- all to the detriment of it’s victims. More importantly, these treatments earn medical doctors over 3 million dollars per surgery.

Although electric shock therapy still goes on to this day (now renamed “electric compulsive therapy), it is disguised by anesthetics which lower the pain and squeamish reaction of it’s patients.

Watch this disturbing but truthful video and report any abuse to the CCHR of Atlanta Georgia. Click here to fill out our “take action” form today.